A few thoughts on the ACC considering its own TV network

* Wasserman Media Group is known in college sports circles.  They represented conferences for the TV contract in the four team CFB playoff.  Per the article, they were also brought in when the ACC renegotiated its deal after the additions of Pittsburgh & Syracuse.

* As noted in the SBJ article, Raycom pays ESPN for a set of ACC content.  Some of it airs on over-the-air  stations and the rest is placed on regional sports networks, many who are owned by FOX.  This content is around 27 football games, 70 men's basketball games, 20 women's basketball games plus content from other sports.  The count does not include the men's basketball tournament games that coexist with ESPN.  I would expect the coexists to end if a separate channel gets off the ground.

This does not include any content that ESPN3 airs exclusively, which was around 60 men's basketball games and 18 more football games.  So the content is available that they desire.

* The re-air rights is interesting.  Either some schools have those rights in hand, the ACC does as a conference or it is negotiable with ESPN.  Nearly half of the existing ACC schools (Florida St., Maryland, Virginia Tech, Georgia Tech, Clemson, Miami) have their football games replayed during the season on RSNs, most of those RSNs have the name "Comcast" in their full name.

Anyways, both the SEC and Big Ten now control their games by owning the copyright to the telecast (pay attention to the very end of a telecast, it may not say ESPN anymore).  I know that ESPN has the copyright when I've see the final credits roll on their RSN telecasts.  That should be easy for the ACC to negotiate, if they haven't already.

* Sports networks are now being targeted.  Or to term it better, customers are now being targeted with the increasing number of sports networks.  DirecTV is now asking new customers in areas with more than one RSN to pay a $3 sports surcharge.  Most of the ACC footprint is covered by multiple RSNs.  Add another RSN, who pays for it?  I believe the SEC channel would be treated as an RSN and I think that's what DirecTV wants for the Pac-12.  I can't see the ACC escaping that either.  I also don't see DirecTV being the only one charging for sports content.  They've opened the door.  Others will walk through.

* In my opinion, the ACC is really late with this.  They needed to get this off the ground before the SEC thought of it.  With the addition of Louisville, there are now four states with both ACC & SEC schools (Kentucky, South Carolina, Florida, Georgia).  In at least three of these states (SC might be the exception), the SEC fan base seems to outnumber the ACC fan base.  There's already one state where the Big Ten Network would coexist with an ACC one if this ever came up (Pennsylvania) and New York City would also be targeted by the ACC.

If the content in the end belongs to ESPN and the article says ESPN is not enthused about this, it could have trouble getting off the ground.
Posted by Matt Sarzyniak at 1:09 PM 1 comment:

This will likely not affect 95% of you who do not look through the years 2005-2011 on the site, but I'm going to be doing some maintenance on these years to try to bring them up to the existing templates used on the '12 & '13 football seasons and the 2012-13 basketball season.  That means prepping those seasons into database tables and using the existing programming structures used through most of the current athletic year.

(PS - If you really want to know about those programming structures, email me. It will bore 99% of you.)

I elected not to go with the archive format of 2000-04 because I had RSN affiliate information.  However I don't intend to carry over affiliate lists, except for FSN national games, because many of those links are no longer valid due to site changes over on those sites, or in the case of sites like JP Sports, they don't exist anymore.

Football should be relatively easy.  Basketball will be more daunting because of the sheer number of games.  I started on 2005 last night and will probably take through the spring & summer to get everything converted over.  This work is secondary to anything on the current year, so it wouldn't delay any TV or schedule information being done on the current or upcoming season.

Thanks for your patience and patronage.
Posted by Matt Sarzyniak at 11:31 AM No comments:

Was bored and decided to go through my MBK database to look over which conferences make it on TV the most in terms of the contracts they have.  I included CBS, the ESPNs, NBC Sports Network, FSN and CBS Sports Network.

FSN was included because both the Pac-12 and C-USA consider the network as national TV, despite pockets of the country that do not receive it.

I may have missed some games that were "home" games for teams that were attached to exempt events, such as North Carolina playing a home game vs. Florida Atlantic under the Maui Invitational.  Sometimes these games are attached to the event instead of the conference, so I've left them out.

These counts only include regular season games.  No conference tournament games are being counted, so the Ivy League is on equal footing with others in the list.  Conversely, we don't yet know what the BracketBuster matchups are, but I don't think they get counted into those conferences' contracts.

I tacked on ESPN3 exclusives on the side because of its availability in so many homes.  For several conferences, ESPN3 is the only place to see regular season games.  The ESPN3 list does not include games from the Big East, Big 12, ACC or SEC syndication packages that end up on ESPN3 in addition to being telecast regionally.  I realize including ESPN3 is a slippery slope when there are some conferences like the Horizon League & Big West which shows many home games free of charge through their website when they aren't televised.

The two conferences missing from the list: Big Sky and Summit League.  The Summit League repurposes many games produced by local carriers on FOX College Sports.  The Big Sky schools tend to make their own deals.  ROOT Sports holds rights on a regional level, but has not scheduled any telecasts yet for this season.

You can click on the image to view it in full size. 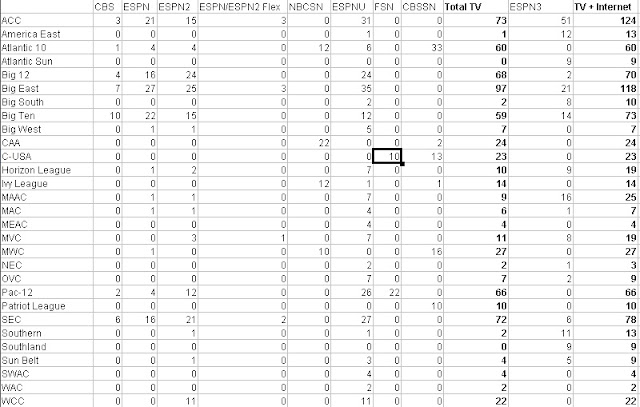 Posted by Matt Sarzyniak at 7:56 PM No comments:

* Thank you for being patient with the listings, particularly with RSNs.   Some RSNs haven't been as forthcoming about their listings when replacing content due to lost NHL games.  I admit I haven't been as diligent as in other years when its come to going back through the listings at times.  Trying to keep a better handle on that as we enter conference play.

* It appears that FOX Sports Southwest is going to act as the SEC Network affiliate for men's basketball, at least in the Houston area.  Other parts of Texas look like they'll be served by local stations.  Some Saturdays in Houston will have 3-4 SEC games in a row with the afternoon syndication package, then 1-2 games that are sublicensed to FOX RSNs.

* Thanks to a follower who passed along a list of cable networks and the number of households those networks are in.  Because of that list, I've moved NBC Sports Network up in several places ahead of ESPNU.  It looks like this list is published once a year, so I'll check back before football season. to see where I should list networks like NBCSN and SPEED/FOX Sports One.

* I missed a memo somewhere regarding the Sacramento Kings telecasts moving off the main CSN California feed and over to a plus channel.  This probably happened whenever the Sharks moved over to the network and I never caught it.  I'll have to pay attention to it through the rest of the year.

* Just a random thought, but its probably a good thing that the Pac-12 TV contracts were structured the way they were where FOX had the football championship and ESPN had the men's basketball championship for 2012-13.  FX probably could have picked up the three tournament games they would have to show nationally, but FX isn't showing any college basketball this year and is out of sight, out of mind when it comes to college sports at this point.  FOX can ramp up FOX Sports One knowing that they'll have those three tournament games next year.

FOX might end up keeping the C-USA men's basketball championship next year too for FS1 instead of selling it to CBS. No disrespect to C-USA, but the conference is losing its bell cow in Memphis and its possible CBS will not have the interest in showing the game as they've had in previous years.

* California put out a release this week telling their fans that Pac-12 men's basketball games on FSN will not be available in the Bay Area, unless you subscribe to a sports package that include FOX College Sports or an out-of-market FSN affiliate.  The Pac-12 didn't seem to be very happy about this and this will affect a pair of Stanford games too, including one Cal-Stanford matchup.  FOX managed to clear many of their Big 12 and C-USA football games to independent station KICU.  Not sure if FOX made an attempt to clear at least some portion of their CBK games in the Bay Area, but I'd be surprised if FOX doesn't try to move those regular season games to FS1 to alleviate this issue next season.
Posted by Matt Sarzyniak at 7:34 PM No comments: