Changes to College Sports Scheduling for ESPN & FS1 with Move of UFC?

Quickly tossing this one out as ESPN finalized a UFC TV contract, apparently replacing FOX Sports as a TV partner per the Hollywood Reporter.

* FS1 had plenty of live UFC content during college football & basketball seasons.  I don't know what 2018 will look like yet since it seems like the UFC fall schedule is being finalized.  Here's a quick view of 2017 & 2016 for college football season alone: 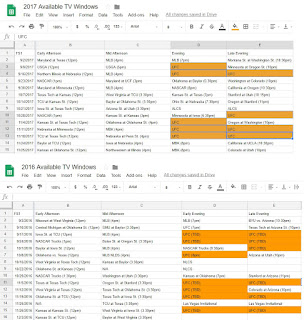 If FOX Sports isn't going after another college sports conference, maybe they would look to start their Pac-12 games a bit earlier where possible.  After UFC, I believe the NHL is the next pro sport to potentially be available after the 2020-21 season.

FS2 felt a de facto UFC replay channel, so it would need something new.  Maybe more college sports with some from the content staying behind if the sale of their regional sports networks goes through.  Maybe something else is coming that we don't know about.  FOX reportedly is adding Smackdown, but that would be for the broadcast network on Friday nights.   Archival WWE items come to mind but the WWE Network would seem to be the home for that.

At the risk of being way off on how this deal is structured & executed, does this affect any late evening college football or basketball?  Would there be more ESPN+ cards from September through March to reduce potential conflicts?  The Mountain West will be on the market soon & previously they made noise about their distaste for some of those later evening starts.  From several reports, BYU wants to remain with ESPN & prefers that relationship.  The Pac-12 should be unaffected as their media rights deals run through the 2023-24 athletic year.

As a side note, I'd be interested to see if there's any cross promotion between ESPN's Top Rank boxing cards and UFC.
Posted by Matt Sarzyniak at 7:42 AM 5 comments:

CFB TV Roundup from the ACC, ESPN and FOX Sports

* ESPN announced the first three weeks for ABC's Saturday Night Football today.  Some observations:
* FOX Sports did announce three specific matchups that would be part of their schedule at their advertising upfront:

None of the games are a real surprise.  FOX Sports has the top choice of weeks to pick first from both the Big 12, which rotates between ESPN and them, and the Big Ten, which FOX Sports has for the duration of the rights agreement.  The slotting of the last two games will be worth watching.  When they last had access to Oklahoma vs. Texas, they chose to air it on FS1 and use it as a lead-in to their NLDS coverage...which was promptly rained out.  Either way, it ended up being a highly rated game and ESPN followed suit last year, airing it on pay TV instead of ABC.

As for Michigan at Michigan St., using the scheduling pattern of the 2014 & 2016 MLB postseason, the potential for a Saturday NLCS Game Six has to be accounted for and the game time is flexible based on whether there is a ALCS Game Seven or not.  Using FOX's strategy to give ALCS Game Seven in 2017 as little potential internal competition as possible with TCU vs. Kansas as the FOX night game, it would not surprise me to see FOX or FS1 air this intrastate matchup at noon.

* The first three weeks, plus nearly all non-Saturday games, of ACC controlled games had their time & TV assignments set on Friday.  Some items of note:

When Navy moved to the American Athletic Conference as a football-only member, it did so while an existing contract was in place with CBS Sports Network to televise football games, with the exception of Army-Navy and their "home" game vs. Notre Dame.

Over that time, I admit that as I was under the impression that Navy's rights would then revert to the existing television contract the conference has with ESPN, but over this winter I was corrected on that stance and that the conference had retained those rights.  From there, the conference, Navy, CBS Sports and current primary rightsholder ESPN came to a new agreement on how to divide up Navy's football rights.

Note that Army-Navy is covered under a separate agreement that ends after the 2028 game.  That deal also included the matchup(s) in basketball.

From here, I'm going to ask you to read Bill Wagner's report from the Capital Gazette because he gets direct quotes on the agreement & negotiations from American Athletic commissioner Mike Aresco & Navy athletic director Chet Gladchuk.

To summarize what Bill unearthed:

A source clarified that the primary rightsholder will not have access to Navy home games until 2020, which would be the first year of any new rights agreements.  CBS Sports Network would have all home games until then.  CBS also has exercised the option to carry the game vs. Notre Dame from San Diego.

From the press release, there are a few subtle items that may be noteworthy:
Posted by Matt Sarzyniak at 11:54 AM No comments: