With the 2013-14 season being a year of realignment and a conference splitting into two, I thought it was worth taking a look at the conferences who appear the most often on television, or at least were scheduled for television the most 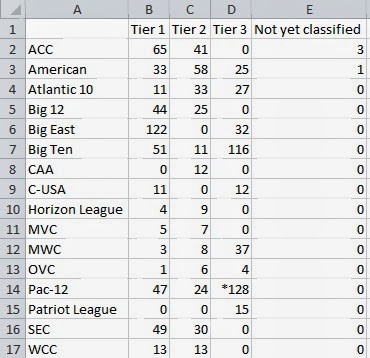 How did I come up with the tiers?  I tried to use subscriber numbers where possible.  Tier 1 was 85 million subscribers plus the broadcast networks.  Tier 2 was anything above 65 million (the three listed are all in the mid 70 millions).  Tier 3 was anything below 65 million but above 30 million.  Estimates I've seen for the Pac-12 Network before their deal with AT&T Uverse had them slightly under 30 million homes, so I think its safe to put them above that & include them in Tier 3.

Games from events like the Maui Invitiational are not included here.  Also, games on CBS tend to count towards both the home & away team even though they could be from different conferences.  CBS pays for appearances instead of a specific number of games.  For simplicity in this list, I went strictly by the home team when counting games on CBS.

I did not include syndication packages such as the Big 12 Network, SEC Network or ACC Network because distribution can change on a game-by-game basis and many syndication networks offer split telecast windows.  I also did not include major RSN packages for the ACC or SEC, plus the FSN packages of the Big East and Big 12.  While the Big East one and probably the ACC one could fall in line with Tier 2, again, the number of RSNs (and in the case of the Big East package, local stations) & alternate feeds can change depending on other commitments and it is somewhat hard to put a solid number on distribution of a game.

You also might be curious about the Pac-12 number of 128.  That is the unique # of time slots that they offered men's basketball games.  145 games were made available over the 128 time slots, but not every game was made available via the main Pac-12 Network feed.

Why not list ESPN3?  Fair question.  I wanted to stick to traditional television delivery as a medium, which ESPN3 isn't even though conferences and ESPN themselves tend to use the word "televise" when discussing events on ESPN3.

Maybe next time I do one of these sheets I'll include a Tier 4, which could encompass ESPN3 plus any blended TV/internet simulcasts like what Campus Insiders offers from the WCC and Mountain West, which allows a game to go national via a webcast while being televised within the conference's markets.