* The C-USA TV schedule is skewed more towards non-conference play with half of the twelve games.

* With ESPN covering a lot of games from other conferences on the opening weekend, it made sense for both Kentucky at Southern Miss and Vanderbilt at Middle Tennessee to remain on Saturday and go to CBS Sports Network.   ESPN did take Navy at FAU, Lane Kiffin's first game as FAU coach, and moved it to Friday night.

* Where are the TV designations for games like Houston at UTSA & North Carolina at Old Dominion?  I think you'll see them in the next batch of announcements, which should include beIN Sports.

* Stanford vs. Rice moving to 10pm ET is a slight difference from the original images sent out regarding the start time.  See the original banner below:

If it airs on ESPN, there's also about an hour gap between the start of this one and the end of Chattanooga vs. Jacksonville St. as FCS games typically take less time.

* Western Kentucky at Old Dominion on Friday 10/20 was not set with a start time, however the Air Force at Nevada game airing after it is scheduled to start at 9:30pm ET, so look for the C-USA game to have a 6pm ET start unless a change is made to move the Nevada game back 30-60 minutes.

* Similar to WKU-ODU not yet having a start time, Illinois at USF now has a game airing after it on Friday 9/15 on ESPN with Arizona at UTEP starting at 10:15pm ET, so look for Illinois-USF to start at 7pm ET.

* On the basketball side of the house, Wichita St. is expected to be introduced shortly as a member of the American Athletic Conference.  A potential scheduling rotation could be where two groups of six schools play home-home inside their group/division and single plays cross division to get to 16 conference games.  They could also go with rotating cross division home-home to maintain 18 conference games (EDIT: An 18 game conference schedule is planned per link above). Possible groupings:

These "divisions" are fairly clean with respect to time zone.

* Outside of C-USA, the Civil War (Oregon St. at Oregon) has moved to Saturday 11/25 from Friday 11/24.  Oregon's press release noted that ESPN requested the move as the Ducks men's basketball team is in the PK80 (Phil Knight) event being played in Portland on November 23, 24 & 26 along with the school to allow fans to potentially attend the basketball games and the football game without having to choose between one event or another on Friday.

As with most of ESPN's basketball events around Thanksgiving, Saturday is an off day allowing their networks to carry their college football inventory.  It should be noted, and I can't stress this enough right now, that ESPN was not yet publicly scheduled to carry the football game and there is no guarantee they'll end up with the game now that it has moved to Saturday.

* So what could ESPN's Thursday & Friday night CFB schedule look like, provided I didn't miss an announced game?  Here's a possibility with  everything in red being a guess.  To reiterate, everything in RED is a guess, not factual: 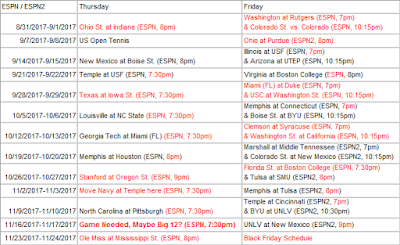 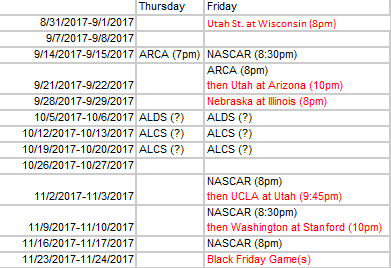 * For completeness, head to this Google Sheets link to view CBSSN's Thursday & Friday night schedule
Posted by Matt Sarzyniak at 11:38 AM

Matt, the NFL preseason schedule comes out on Monday, and if the trend continues, expect Carolina to play Pittsburgh at Heinz Field the last week. Do you expect NC State-South Carolina to move to 8-31 and for ESPN to pick the game up, thereby leaving Ohio State-Indiana for FS1(or Fox if necessary)?

Hi Howard. I don't necessarily see it moving. Last time the Charlotte game was moved to a Thursday it was nearly a year in advance. Granted, the two teams are close to the game site, so there shouldn't be a huge need to rebook any events around the two schools.

I also think it is to the benefit of ESPN, and maybe CBS, to keep this game on a Saturday if CBS intends to sublicense a SEC game from CBS (I'm still getting stonewalled from all sides as to whether the ACC or SEC controls TV rights on this one). Yes, CBS would rather have Florida St. vs. Alabama, but I don't know if CBS would have to give up a top choice for the SEC later in the year and if CBS or ESPN would get to choose the replacement week.

If this one moves to Thursday, maybe Michigan vs. Florida would move to CBS instead. I think ESPN's operating control stake in the Houston game (BYU vs. LSU, see bottom of webpage) keeps that game in the family.

That's interesting on NC State-South Carolina possibly remaining on a Saturday, because doesn't SC have a problem with opening on Thursday Nights in general than the rest of the SEC?

Also, as far as FSU-Alabama goes, if I recall correctly, it's the SEC's game for TV purposes which would allow CBS to pick it up. But we don't know whether the sub-licensing deal between CBS and ESPN has been extended or not.

Lastly, I don't think Florida-Michigan can go to CBS because of the primetime clause in the Cowboys Classic contract. At any rate, and contrary to what has been posted here and elsewhere, I think that game will go to ABC.

South Carolina doesn't mind opening at home on Thursdays as their home stadium is located just off the campus compared to many SEC stadiums where the on-campus stadium often uses existing campus parking lots.

Excellent point re: Florida & Michigan as being a primetime game. As it stands, I've been running through a 2.0 version of the early season & hope to have them published this week.