With the Big 12 being a conference that has a pair of TV partners on relatively equal footing, I also broke down the conference's TV data by the network group and over-the-air broadcast vs. pay TV.  Pay TV for this discussion included ESPN, ESPN2, ESPNU and FS1 since FSN & Longhorn Network aren't as widely available. 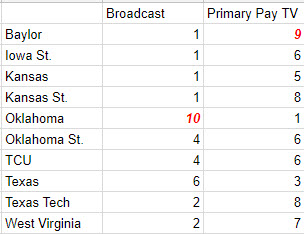 ESPN vs. FOX Sports.  Note that ESPN's game count has a maximum of 23 games across ABC, ESPN, ESPN2, ESPNU and Longhorn Network where FOX is not constrained. 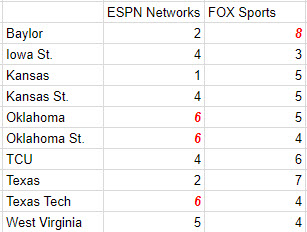 Some statistical items
* Who appeared on over-the-air television the most as part of their conference's TV deal?  Oklahoma.  Their staggering 10 appearances on ABC and FOX eclipses all other FBS programs.   The only pay TV appearance they had as part of the Big 12 contract was the West Virginia game on Black Friday.
* How can Oklahoma make so many appearances on broadcast television?  To my knowledge, the Big 12 is one of the few conferences that doesn't have some sort of appearance limit when it comes to broadcast television or a limit that requires appearances on a conference TV network, which the Big 12 doesn't have.  Previously the conference had appearance limits attached to the ESPN side of the house (the limit was a relic from when ABC could only air Big 12 games), but those ended after 2015.
* The only games West Virginia included as part of the Big 12 contract were their intraconference games.  The Mountaineers sole non-conference home game vs. Youngstown St. ended up being their member retained game.
* Broadcast network games increased from 12 in 2017 to 18 in 2018 and primetime appearances increased by one 6 in 2018.
* Each Big 12 school appeared at least once on ABC or FOX, a step up from 2017 when Baylor was the only school who missed out on a broadcast network appearance.  You'll find another statistical item about 2016 below.
* One of the anomalies that allowed Oklahoma to get so many broadcast network appearances was that all of their non-conference games were home games.  The Sooners, Kansas St. and Oklahoma St. had all of their games made available to the Big 12 pool after each school had their member retained game set aside.
* One constant on a year-to-year basis: After excluding member-retained games, if there's a Big 12 game on FSN, it is highly likely to involve Kansas or Iowa St.  Five of the six games distributed by FSN involved at least one of those two schools.
* Oklahoma St.'s non-member retained game vs. Kansas on 9/30 was their first non-member retained appearance since 2014 (9/13 vs. UTSA).  Their last appearance on FSN vs. another Big 12 school was a year prior vs. Iowa St.
* Kansas has made a single broadcast network appearance each of the last three years, with the last ABC appearance vs. Texas on 11/19/16.  Prior to this "streak", their last broadcast appearances were in 2009 when they made five appearances on ABC.
Posted by Matt Sarzyniak at 7:48 AM