If I and others have read these right, ESPN gained a lot of rights and FOX gave up a fair amount to stay on as a rights holder

Football
*FOX will carry the majority of the OTA football games. FOX's release says eight games on the broadcast network. Pac-12 release says a combo of 10 games on ABC and FOX, so ABC is mostly out covering the conference.
*14 games on F/X. Bet those are early afternoon (3:30pm ET) when FOX has the primary primetime window.
*Eight of ESPN's 22 football games on Thursdays & Fridays. Two ABC games. Sounds like most of ESPN/ESPN2 football games will be in late evening as they tour the 10:30pm window.
*FOX and ESPN will alternate airing the conference championship game, which will be on a Friday night.  FOX goes 1st.
*FSN is out as far as carrying regular season games
*Rest of games will go back to Pac-12 conference to air as part of Pac-12 Media Enterprises

Men's basketball
*46 games for ESPN with as many as 28 on ESPNU
*22 games on FSN
*Games will be scheduled for Wednesday, Thursday, Saturdays and Sundays.  11pm ET could be the time for most ESPN owned games
*Both ESPN and FOX Sports Media Group each receive one quarterfinal and split the semifinals
*ESPN/ESPN2 and FOX/FX will alternate airing the final.  ESPN will go 1st
*Vast majority of games will air on Pac-12 Media Enterprises platforms

Other items
*All other football and men's basketball games, including 1st round of men's tournament and two quarterfinal games go to Pac-12 Media Enterprises, which will house a Pac-12 television network and a Pac-12 digital network
*Some games on Pac-12 TV network, others games will be digital network
*No sublicensing allowed.  Means that CBS won't be airing the basketball final or that Versus will air football games
*ESPN now airs the women's basketball championship and is an Olympic sports rightsholder
*ESPN and FOX are allowed to sell a presenting sponsorship for the championship event it has in a given year
*The conference will now control licensing and corporate sponsorship sales for events.  This was previously controlled by FOX
*Will be a football game "draft".  Selection order was not divulged, but Pac-12 Network can trump all partners at times throughout the year
*Conference will discuss with high school associations before scheduling football Friday games
*Not rights related, but conference will request proposals from other cities besides Los Angeles to host MBK tournament

Not sure if FOX and ESPN have network exclusivity in their broadcast windows against each other. 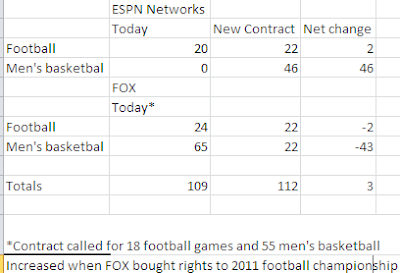 Posted by Matt Sarzyniak at 1:38 PM