NOTE: For the purposes of these statistics, I counted the games that were played, with one exception that is noted below.  This also does not include the network placement of any conference championship game. 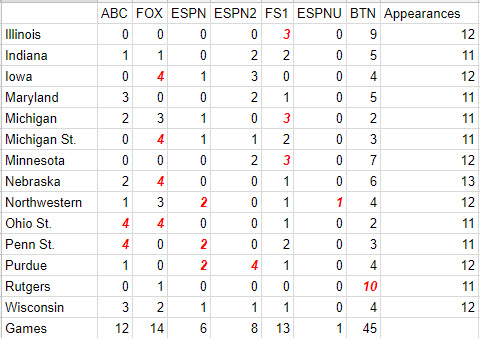 With the Big Ten being a conference that has a pair of TV partners on relatively equal footing, I also broke down the conference's TV data by the network group and over-the-air broadcast vs. pay TV.  Pay TV for this discussion included ESPN, ESPN2, ESPNU and FS1 since BTN isn't as widely available as the other four. 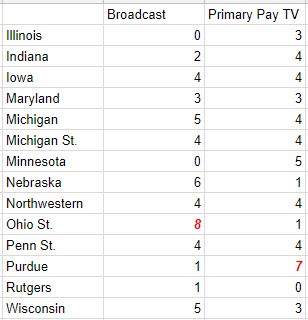 ESPN vs. FOX Sports.  Both ESPN and FOX Sports have a maximum of 27 telecast windows.  BTN is covered under a separate TV deal, so even though it is majority owned by...New FOX? 21st Century? FOX FOX?....anyways, its not part of the same contract that FOX Sports has with the Big Ten. 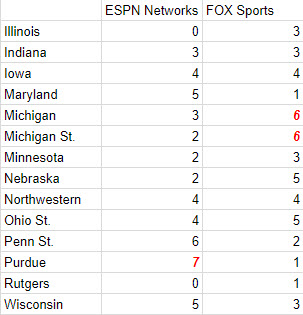 Some statistical items
* Why does Nebraska have 13 appearances under the Big Ten deal when they only played 12 games?  The Akron game on FOX, unlike nearly all other weather cancellations, occurred during the telecast window.  FOX spent the time filling while waiting out storms that never stopped.  So I counted that as a Big Ten exposure for FOX and it looks like it was budgeted for in their final counts.  When Nebraska found Bethune-Cookman as a replacement opponent, that game was played on BTN.
* Half of the conference had their entire schedule controlled by the Big Ten's TV partners.  All 12 games for seven schools, which astounds me but at the same time feels like smart scheduling (EDIT: See the first user comment to this post as to why this occurred).
* The 45 games on BTN were played over 31 telecast windows.
* The combined number of regular season primetime games played or intended to air on broadcast television was five, down from seven in 2017.
* Over two seasons, Illinois is the only Big Ten school not to play on FOX.  All FOX Sports appearances have been on FS1.
* Rutgers had ten appearances on BTN for the 2nd straight year.  They have not appeared on an ESPN platform as part of the current contract structure.  Their last appearances on each ESPN channel:


* Number of regular season night games per network, including weeknight games.  6pm ET was used as the earliest start time for a night game:

Posted by Matt Sarzyniak at 8:28 AM

The reason those 7 schools (all in the Big Ten West) controlled all of their games ids due to them having to play 5 road conference games. To get to 7 home games, all non-conf needs to be at home. Next year it will be the same for the Big Ten East.

Thanks & I'm going to mention checking this comment noting that point.