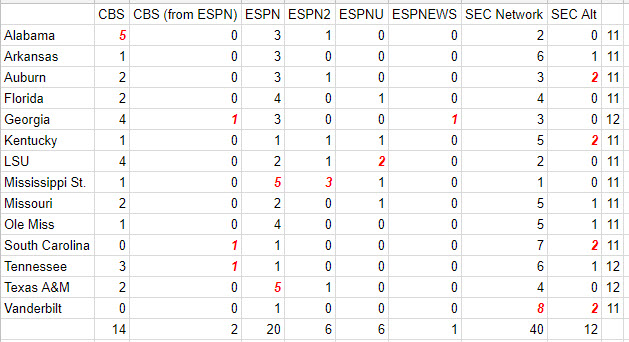 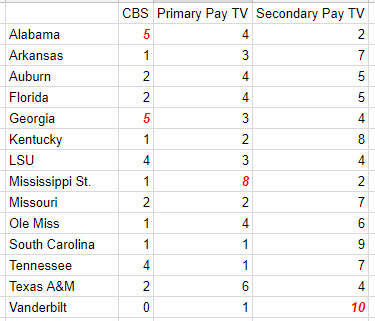 Some statistical notes
* As of now, this is the final year of the agreement for ESPN to sublicense two games to CBS.  The two parties could negotiate a new agreement if they see fit.  The two games that were sublicensed in 2018 were West Virginia vs. Tennessee & Georgia at South Carolina.
* Alabama was the only school to get to the maximum of five CBS appearances under the CBS contract.  As mentioned above, one of Georgia's appearances were in a game sublicensed from ESPN.  It does not count as part of CBS's contract with the conference or the appearance maximum in that deal.
* ESPNEWS is not considered to be a network that SEC games are available to air on, but the channel was used to air Middle Tennessee at Georgia on 9/15 due to schedule changes from weather related cancellations and start time changes.
* 26 games appeared on ESPN & ESPN2 in 2018, down from 31 on those two channels in 2017.
* A start time that most SEC schools hate is noon ET.  Ten SEC games started at that time of day which ended up on ESPN (8), ESPNEWS (1) or ESPNU (1).  This combined number is the same as 2017.
* Taking into account all noon ET starts across all networks, here's the breakdown of times a school appeared in a SEC controlled game at noon ET and the number of times a school hosted a game at that start time. 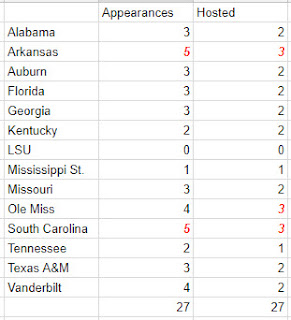 Posted by Matt Sarzyniak at 8:38 AM