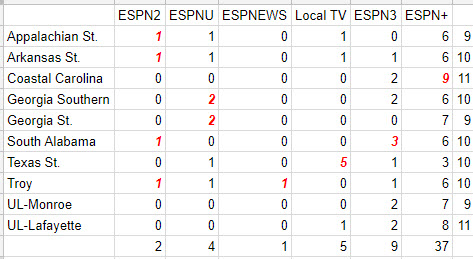 Some statistical notes
* This was the first year of an enhanced Sun Belt TV contract.  The linear TV enhancement for the regular season won't happen until 2020.  This update accounts the conference championship game airing on one of ESPN's TV platforms and the addition of games to the ESPN+ service.
* Texas St. accounted for the production of the local TV games.  Four of the five games aired on ESPN3.  Only the UL-Lafayette game aired on ESPN+.  Adding those games into the ESPN3 & ESPN+ appearance columns would put Texas St. at five ESPN3 appearances (most of any Sun Belt school).
* Overall, the number of regular season games on national linear TV platforms dropped from nine in 2017 to seven in 2018. One of the games in 2017 was on Championship Saturday, so even if you tack on the airing of the conference championship in 2018, they're still down a game.  One of the 2018 games was on ESPNEWS, so in terms of ESPN2 and ESPNU games, they were down three on those two channels from 2017.
* Somewhat rare: UL-Lafayette never appeared in the conference's linear TV package during the regular season, which is often set in advance of the season & is almost always weeknight games, but managed to appear in the conference championship game.
* UL-Monroe's last national linear TV appearance in a Sun Belt controlled game was Thursday 11/19/15 at Texas St.
* Coastal Carolina has yet to appear as part of the Sun Belt linear TV package.  Coastal did appear on ESPNEWS in 2015 & 2016 vs. Liberty in Thursday night games.
Posted by Matt Sarzyniak at 9:28 AM