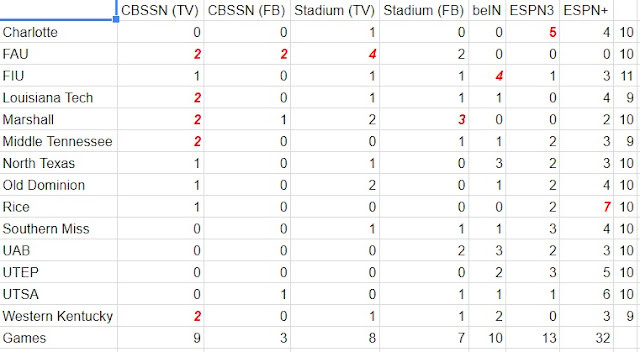 Conference USA has four primary partners so I've combined together the CBSSN games into one bucket, the Stadium games into a second and the ESPN digital games into a third. 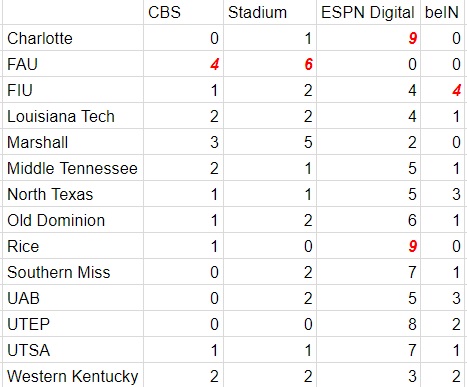 Another way to uniquely slice Conference USA's data is linear TV vs. free digital streaming vs. pay digital streaming.  I believe ESPN3 is still included with a handful of telcos internet service independent of having ESPN as a linear TV channel, so I'm throwing those games under free streaming. 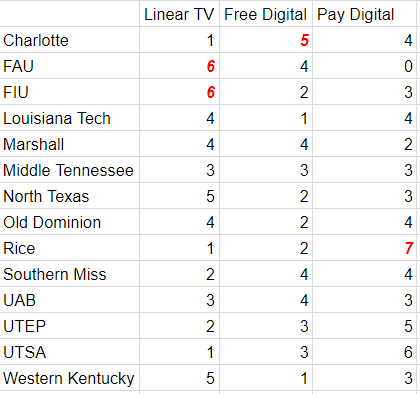 Some statistical notes (maybe more commentary than notes)
* Data for C-USA is static throughout the season. All the network groups made their choices in the spring. So schools like UAB & Middle Tennessee making a combined six linear TV appearances while FAU appears in the same number of games isn't a surprise. They're just capitalizing on their 2017 success and what was expected in 2018. FAU & North Texas were the division winners in the preseason media poll.
* The number of regular season games that aired on linear TV nationally decreased from 35 in 2017 to 27 in 2018, while the number of Facebook exclusives increased from six in 2017 to ten in 2018. The addition of CBSSN produced Facebook games does impact that increase.
* Particularly with the selections CBS Sports Network produced for their Facebook games, it feels like they had at least the top 5-10 selections from the conference over the course of the season, particularly when you look over the choices they made for non-conference games.
* To my knowledge, the games that aired on ESPN digital platforms weren't selected by them. They were the inventory after the three linear TV partners made their choices. Where ESPN I believe had a some control was the decision to place a game on ESPN3 or ESPN+.
* This was beIN Sports final season of C-USA football under a three year agreement. I have no idea if the conference intends to continue with the network.
Posted by Matt Sarzyniak at 9:25 AM