NOTE: For the purposes of these statistics, I counted the games that were played.  Not the games that ended up being cancelled due to weather or other issues.  This also does not include the network placement of any conference championship game and a few other instances that I'll detail below.

And a breakdown of games carried on CBS Sports Networks vs. ESPN's linear TV & digital platforms.  CBS gets first choice of games after Boise St. home games are set aside for ESPN. 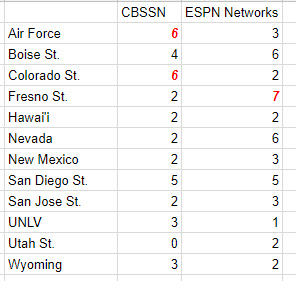 Some statistical notes
* Not included in the counts are the games Hawai'i shows on pay-per-view, which are part of a side deal the school has with Spectrum within the state.  Those games get shown on Stadium's mobile & tablet app outside of the islands.  Also not included are the three games that schools elected to produce their own webcasts for after they were not selected to air on CBSSN, ESPN Networks, Stadium via Facebook or AT&T SportsNet.
* As mentioned above, Boise St. has its home games set aside for airing on ESPN's platforms.  Its a bit surprising to see Fresno St. eclipse Boise St.'s appearance count on ESPN's platforms.
* Two games were chosen by ESPN to air on ESPN3 after AT&T SportsNet and Stadium made their selections.  Those games were Incarnate Word-New Mexico & Nevada-San Jose St.
* Three games did not have any video distribution.  This choice was made by the home school similar to the choice to stream after all other TV partners bypassed the games.
* Seeing Utah St. be skipped entirely by CBSSN isn't surprising.  Looking back at last year, UNLV made all of their linear TV appearances on ESPN platforms.  What is surprising is that it was during a season where Utah St. made it into the top 25 late into the season.  In the past, ESPN worked with Campus Insiders on a game swap when Fresno St. was undefeated, taking a game at Wyoming and placing it on ESPN2 and sending Nevada-Colorado St. to CI.
* Eighteen of the games that ESPN selected before the season started both their start time & TV network decided during the season (excluding weeknights & 1st three weeks, where UConn-Boise St. had its TV network decided & Oregon St.-Nevada was elevated due to weather cancellations & schedule changes).  Of those games, the network choices were as follows:


* For those in-season ESPN linear TV decision, the timeslots were as follows, using Pacific Time as the base:
Posted by Matt Sarzyniak at 9:03 AM