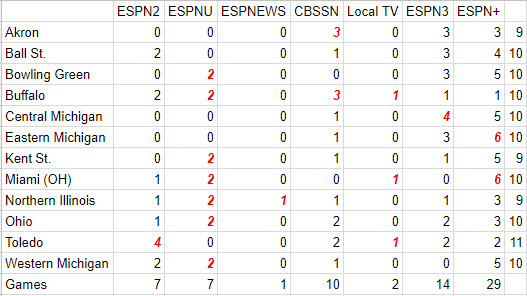 Some statistical notes
* Seven regular season games on ESPN2 ties the 2008 and 2016 seasons as the second highest number of games on that channel.  2005 had eight games on the channel.
* Buffalo's seven games on national linear TV is the most for any school since Western Michigan also appeared seven times during their Cotton Bowl season.
* For the two local TV games, the Buffalo at Toledo game aired outside the Toledo & Buffalo markets on ESPN+.  Cincinnati vs. Miami game aired on ESPN3 in markets where the game was not shown on local television.
* CBS Sports Network had six of their ten games chosen through the in-season selection process where they had a choice of more than one game, either as the first choice or in the case of Black Friday, the second choice after ESPNU.  In other words, I'm not including the situations where there were two games and ESPN took theirs first & left the latter to CBSSN.  For those six games, a game involving Buffalo was chosen three times.  Akron was involved in two of those games.  An interesting side note: two of those games involved Army, whose rights are owned by CBSSN.
* There were six situations where a pair of weeknight games were set aside and the network decision was made about 6-12 days in advance, either where both games were on ESPN platforms or one game was on an ESPN platform and one was set aside for CBSSN.  Western Michigan appeared in three of the games that were chosen by the network that is subscribed to in more homes or in one particular case, linear TV vs. ESPN+.
Posted by Matt Sarzyniak at 8:57 AM